After many enjoyable years in the charter business and experiencing other great sailing destinations, it was time in 2017 to return to Greece. Back to where it the very idea of Mediterranean charter boating began: a bareboat sailing holiday around the Ionian Islands.

As it happened, that part of the world is also where I began my professional sailing career. In 1987 I joined Falcon Sailing as a flotilla skipper/sailing instructor.  Falcon had by then been operating for more than a decade; calling the Ionian Sea home as did another well-known pathfinder charter company, Island Sailing.

Back then Mediterranean sailing holidays were sold strictly as flotilla charters. Flotillas would be put together from bookings and the small fleet of a dozen boats would set out. Boat crews were free to steer their own separate courses by day, and generally expected to meet each evening at an agreed destination.  Accompanying the flotilla would be a lead boat crewed by professional skipper, steward and engineer; a travelling base with a loose cover over the fleet, and carrying spare parts and other supplies such as medical.

Most flotilla schedules in those days included a training element. They were designed to introduce people to sailing, to share in the relatively new experience of what a Greek island holiday afloat could offer. The Ionians were considered the best place for less-experienced sailors, due to their gentle winds and numerous places of interest within a short sail of each other.

The only convenient way to get there was via charter flights to the military outpost of Preveza airport. With a small emerging market there was just one flight per week. And so was born the Saturday to Saturday charter, a cycle that spread throughout the Mediterranean and is still prevalent today.

In the 1980s there was a lot of cooperation between competing companies, at least out on the water. Knowing the other operator had a flotilla sailing at the same time in the same general cruising area, I would often find myself chatting with the competition’s lead skipper over an early-evening beer, and we would informally agree to take different courses next day. That way our flotillas were in no danger of arriving at the same quay in the same small village on the same night, so we avoided congestion on land and water.

On arrival in those coastal Ionian settlements we’d  invariably be greeted by locals. Many people offered firm opinions about strangers turning their quays built by distant forebears for fishing and trade into tourist parking lots. But they warmed to us, became very welcoming and friendly as they quickly learned the value of having us around. In those days there would always be space for the 12 boats in our flotilla, and a ready welcome at the local tavern in anticipation of the night’s trade ahead.

The Rion-Antirion bridge, on the road to the Ionians 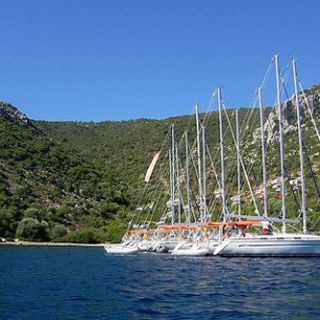 From Modest Beginnings to Boom Time in Tourism

So what has changed since my ‘80s sojourn? Greece’s roads for one thing. Back then, on arriving early in the season to prepare the boats, I would travel overland from Athens. Today, gone are the miles of winding roads and the vehicle ferries that used to span the waterways. Now this road is one of the most impressive highways imaginable. Tunnels, many several kilometers long, take you through rather than around the mountains.

The Rion-Antirion suspension bridge that connects the Peloponnese peninsula to mainland Greece across the Gulf of Corinth is a sight to behold. I had always remembered this as a pleasant route to travel, with sea views and lush, productive land to journey through. The landscapes are still the same, and now it’s a pleasant drive as well!

To the sailing enthusiast visiting the Ionians after 30 years’ absence, the real difference is the 3000+ boats now located in these parts, compared to maybe 300 in 1987!

My return to the Ionians took place in the second week of August, during peak season. The timing was important, so that I could witness the impact of the congestion so many boats must create.  I have always believed that the best time to visit Greece for sailing is early in the season, before it gets too hot and more importantly while the locals are still welcoming. The weather pattern hasn’t changed, and nor has the hospitality. But the industry has changed immeasurably, and (mostly) for the better.

Greece has done a good job of scaling services up to meet the growing market. The marina in Lefkas has been extended to cope with the much larger boat numbers now passing through. Nearby Nidri has grown organically, perhaps, it seems in passing, somewhat haphazardly, even out of control.  But it’s very clear that the crowds keep coming and the once quaint settlement simply had to grow to meet demand.

My old favourite Flisvos taverna is now lost in the crowd of bars, but remains as authentic as ever. It is still run by the same family who greeted me in February 1987, still a gathering point for the locals, and still serving an uncompromised Greek menu. Less can be said of the other tavernas that open just for the season and tailor their menu to suit the picky tastes of tourists. Still Nidri is well worth the visit, and it offers a lot to keep the family amused.

In 1953 there was a massive earthquake centered on Kefalonia, followed by more than 100 devastating aftershocks. When I was there in 1987 there were still frequent rumbles, but by then any buildings unable to withstand a good shake had fallen down and rebuilding was well under way. On my return it was clear that not only had their local communities been reinstated, they had prepared themselves for the growing demands of charter boat tourism as well. 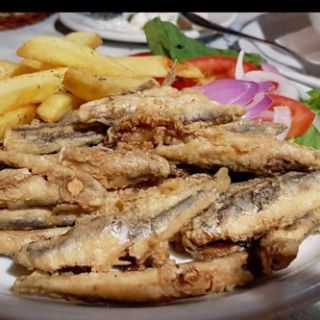 Flisvos Taverna food, as good as ever 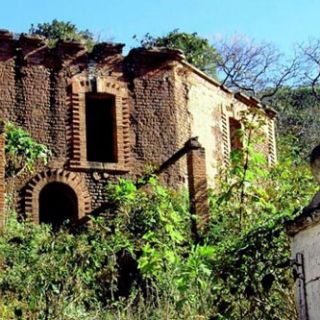 Crowds & Congestion, and Time for a Rethink

Where space has allowed, the ancient quays have been extended significantly. Areas I remember as swampy coastal wasteland have now been filled in back to deep water. I gained a distinct impression that the old Ionian ports have been re-designed with aesthetics and modern facilities working in harmony.

Despite the development, there are some places that are too constrained to ever cope with a mass influx of people and boats. Places too popular for their own good and in too much demand from visitors. Sivota can take around 300 boats, which 99% of the time is more than enough. But it can get tight. Yannis’ taverna is still there, in the thick of the many clubs and pubs that have come since. By necessity some creative parking options are put to use. Flotillas raft their boats out from the pier, rather than each skipper trying to place their boat stern-in to the quay.

On the western side of Sivota’s small harbor, around 50 boats can tie stern-to-shore, with space outside them for another 30 or so to anchor. Sivota is a vibrant place and I could see the attraction of this village, and why most people sailing in the Ionians want the visit experience. I suggest however that charterers plan not to be there Sunday night, when the place is likely to be at its busiest.

I found the quaint little port of Kione on Ithaca overstretched, as it is not  possible to extend the quay.  The best chance of a good berth is to arrive in the morning, wait for someone to leave and play the inevitable game of musical chairs.

If really determined to visit Kione, get into town early for brunch and a walk around before the heat of the day sets in. Then leave your berth to seek out a quiet swimming spot and a peaceful night’s anchorage.

It seems a shame to commit a full day to such a small town as Kione. If planning an excursion around Ithaca, I suggest using Vathy just to the south. The port of Vathy is huge by comparison and I doubt it would ever reach capacity. Vathy has a good range of shops and restaurants. I found a nice traditional taverna that only the locals seemed to patronize, just a short walk back from the quay.  A great little spot, out of the main tourist traffic flows. 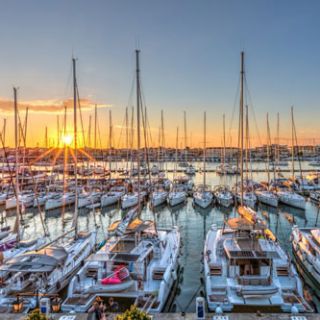 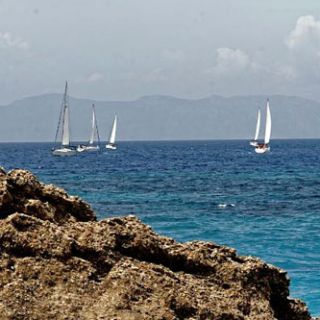 A flotilla sets sail for another day in the Ionians

Getting Away From it All: the Ionians Still Have it

The coast of the many Ionian islands sport so many beautiful bays and interesting places to stop by, and that means choice. Visit a popular place humming with activity and accept the limited boat space. Or simply sail on and find a much quieter spot of your own to anchor in.

When I was working around the Ionians in 1987, the locals would all say that Greece actively channeled international tourists towards the Cyclades.  The Ionian islands were kept for Greeks to enjoy. At that time only Greek nationals could own land on any of the Greek Islands so they had full control over what went on. Many Greeks arrived over summer to work the bars and restaurants. Some even spoke English with an Australian accent which I found highly amusing!

On my return I could not help but observe that since opening up to the EU the birthright of those people seems to have been lost.

On these Greek islands, most visitors inevitably want to be in the center of the action. As if the very congestion reassures them that this must be the place to stay, because everyone else is here. Yes, this place may well be where the party is going down. But I find it sad to think that this is that what people came to Greece for? The Ionian offers so much more if you are prepared to explore..

The Ionian boat charter environment has certainly changed in thirty years. It is quite apparent that older guide books are in serious need of updating. At Sail Connections, we are certainly taking another look at how we describe and promote the destination.

On and around the islands of the Ionian Sea, there are abundant on-shore attractions to enjoy; just like in any other popular modern travel destination. It can be hard to get away from the crowds. But that’s where a bareboat charter comes in. Sail a short distance from the congested ports, and you will still find places that hark back to yesteryear. Places where you can easily get out of phase with the mass tourism, and enjoy the peace and cultural ambience of the Mediterranean as it once was. 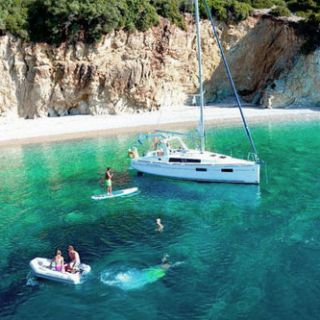 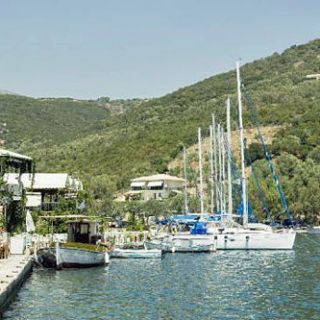 Tied up at Sivota, Lefkas Island