As a New Zealand charter broker we’re very mindful of how few sailing boats this country has for charter. While we at Sail Connections can send people sailing in multiple exotic international destinations, we don’t have the boats to share the pleasures of our own renowned marine backyard. This 2021 America's Cup summer will entice people to want to go boating. That only highlights the gap in the local charter industry.

Which is what makes the efforts of those who fight to retain a NZ boat charter industry so much more commendable.

With the AC event now underway, I’m taking this opportunity to highlight and endorse the boat charter services that Penny and Carl Whiting offer. In the Whitings, NZ has a family of sailors who place the joy of sailing and shared experience first and foremost. They look at the business case, and do it anyway.

So I am pleased to get behind Whiting Sailing, and their latest sailboating service out of Auckland, home of the America’s Cup.

Most Kiwis, certainly those of us with the remotest connection to sailing, know of Penny Whiting MBE, who over many years has introduced more than 30,000 people to sailing.

I have had the pleasure of sailing alongside Penny, leading charter boat flotillas to join with her private charters around the fabulous Society Islands of Tahiti. On Penny’s charters, the crewed service is like nothing else in the world. For a start there’s Penny’s company, both charming and commanding at the same time. Penny has always run a tight ship, but you hardly notice such is the manner in which she includes everyone in the routine of life aboard.

These days, sailing with Penny is less about the sailing school and more about an enjoyable time on the harbour. Her on-the-water involvement is largely restricted now to short excursions and sharing her experiences of the nautical life. She still does the occasional private lesson.

Penny’s son Carl and his wife Jasmine operate Whiting Sailing, taking over the sailing activities that Penny so professionally operated for so long. Whiting Sailing offers its own unique brand of sailing holiday packages aboard the 55 foot Emotional Rescue, which has been fully refitted and configured to suit its new purpose.

Carl has been a member of both Team NZ and Oracle AC campaigns. He partnered with Hamish Pepper to win the 2006 world champs in the Star Class, going on to represent NZ in the 2008 Beijing Olympics. Carl has also been prominent in the sports of cycling and jujitsu. 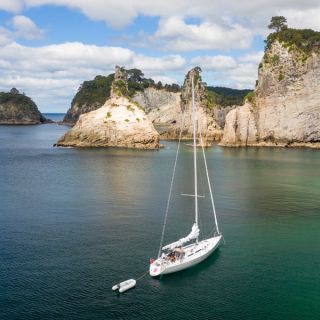 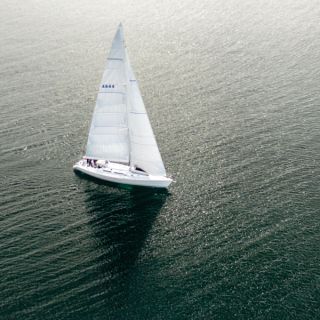 That experience is tailored to your aims and objectives. If you wish, it can include an element of learning to sail. Or you may choose a day of simple relaxation and togetherness; time to enjoy the great maritime outdoors while observing all that’s going on around you.

Carl’s sailing tuition programmes are about much more than which rope to pull and where the wind is coming from. Trust me on this, a day sail on Emotional Rescue has value that far exceeds what it costs in dollars.

Emotional Rescue is from the drawing board of Laurie Davidson, the chief designers of the successful 1995 and 2000 TNZ America’s Cup winners. Carl’s restoration is a credit to him, and now others can enjoy the exhilarating experience of sailing this iconic craft.

The current focus of Whiting sailing is on the services Carl provides as skipper of Emotional Rescue. Day sails are normally designed for 10 people with room for a couple more. There’s also the option of overnighting in a picturesque outer harbour bay, in which case numbers are limited to a maximum of eight.

And right now the big drawcard is the America’s Cup, around which charters are generally being organised.

Once the regatta leaves town, it’ll be back to the Whiting roots: the family tradition of introducing people to sailing and developing their new-found love of the sport, the recreational activity, the way of life even.

The spectacle of foiling America's Cup boats flying around the harbour is something not to be missed. So get in touch with Whiting Sailing for the ultimate spectator experience. On any given day with suitable conditions, marvel at these revolutionary craft carving up the harbour at sensational speeds.

The spectacle of the 36th America’s Cup begins in earnest with the PRADA America’s Cup World Series Auckland and the PRADA Christmas Racing from 17 to 20 December 2020. All four AC75s, as the boats are called, will compete. From 15 January to 22 February, the challengers will race to determine who will challenge Team NZ for the trophy. The main event begins on 6 March 2021, when Team NZ defends the America’s Cup in a first-to-seven series.